Welcome to the first Rebble Community Update of 2018!

One of my most important roles in the Rebble project is Lead Emoji Sprinkler, which requires fastidious monitoring of the Rebble Discord to ensure that all comments indicating progress or good will are met with a swift

thanks to the prodigious output of new and old contributors alike. Daren’t delay divulging details of the downright deluge of development deeds! As always, if you’d like to add something, send us a tweet, or better still, submit a pull request!

This will launch QEMU and you’ll see something like this: 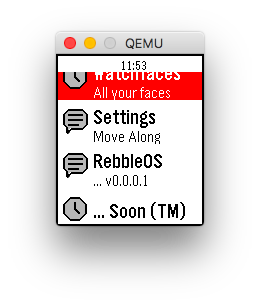 which is the actual RebbleOS firmware running on your machine!

Once you’re up and running with the firmware, you can be like @CTKRocks, @TerttyCurlyfries, @Stubenhocker1399 and @zbsz and work alongside @ginge and @jwise to flesh out the UI, system apps, and OS functionality. Contributing to an operating system might seem intimidating - but developers of all levels can make meaningful contributions to RebbleOS!

If you’re not a developer, you can help by testing and reporting issues, creating graphical assets, or assisting with documentation or the wiki. We’re feeling a lot of this out as we go as well, and we’re excited to have you come and learn alongside us. So don’t be shy – we’d love to have you come and join us, no matter who you are!

So, what’s new? Here’s some highlights:

Previously, the watchfaces you saw were all baked into the firmware – everything had to be compiled in with the OS. We’ve added preliminary support for reading the Pebble filesystem, so you can see the apps that PebbleOS installed on the watch; and, to our surprise, some of them even run! We’re working on adding more features and more API compatibility every day!

A big step towards making your watch look and feel like a watch! Thanks especially to @CTKRocks and @Stubenhocker1399 who have worked hard to get the UI looking beautiful.

RebbleOS was designed to support multiple different types of watches, and now chalk builds in the same tree as our beloved snowy. If you’re interested in getting RebbleOS working on tintin, we’d love to have your help, too!

Please note: this is alpha firmware and while all this stuff may look pretty cool, it’s not to the point where you’re going to be wearing it on your wrist daily yet! (for example, the battery won’t last that long until we take a serious look at power management!)

One fundamental challenge in working with the Pebble has been Bluetooth communication, which is critical to meaningful operation since most Pebble functionality requires the device to be able to talk to your phone. Firmware superhero @ginge has now overcome this challenge as demonstrated in this newly-released video of real notifications being sent to a RebbleOS-powered Pebble from a PC via Bluetooth!

Breaking: an even newly-er released video of notifications being sent via Gadgetbridge! (friends of Rebble - check them out!)

I’m glad you asked - actually @jwise thought you might ask and I’ve paraphrased his thoughts and added some of my own:

It’s a fact that no new Pebble hardware is being produced, ever. It’s been over a year since Pebble closed its doors and as such there are a finite number of devices out there, and their ZEBRA connectors are going wonky, their cases are suddenly ingressing water, and their batteries are getting one charge closer to failure every 4-10 days. But while Pebble hardware may remain frozen in time, technology marches on. New versions of Android and iOS continue to be released, along with new hardware, and with every major release we all cringe and utter “will our Pebbles still work”? Well that’s part of why we’re building new apps, appstores and firmware - but another exciting reason for creating our own open-source, FreeRTOS-based OS is that it opens the door to other Pebble fans or even large smartwatch manufacturers in Shenzhen to build their own new hardware in the spirit of Pebble/Rebble!